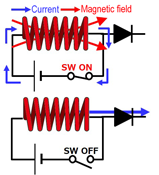 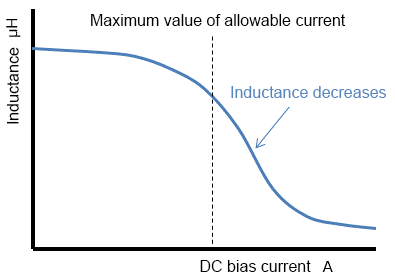 Q factor (quality factor)
: Q factor, which refers to the ratio of the inductive reactance to the resistance of an inductor at a specific frequency, is an index of inductor performance. The higher its Q factor, the closer an inductor is to an ideal inductor. The value obtained by dividing inductive reactance XL (= ωL = 2ΠfL) by ACR indicates the magnitude of a loss with respect to the frequency. The equation shows that Q is high when ACR is small.
Copper losses
: Losses due to resistance components when current flows through a conductive wire is referred to as a copper loss.
Iron losses
: Losses that occur in a core when a magnetic flux passes through it (hysteresis and eddy current losses) are referred to as iron losses.
Skin effect
: Increasing the frequency of current flowing through a conductor causes the current to flow only through the surface of the conductor, resulting in a higher current density at the surface section and thereby an increase in the resistance value. This is referred to as a skin effect.
Proximity effect
: When multiple conductive wires are in proximity to each other, the magnetic field formed by each wound wire induces an eddy current. At high frequencies, the current flow in each conductive wire concentrates in a narrow region that contacts an adjacent conductive wire, resulting in a higher current density at the proximity section and thereby an increase in the resistance value. This is referred to as a proximity effect.
Eddy current losses
: A magnetic field that changes due to electromagnetic induction generates an eddy current in the core of the conductor. The energy that generates this current is converted to heat as a loss due to the electric resistance of the core material. This is referred to as an eddy current loss.
Hysteresis losses
: Changing or reversing the magnetic field in a core will cause it to return to its original state with a hysteresis (hysteresis loop shown in BH diagrams of core materials). The energy consumed by this hysteresis action is lost as heat. This is referred to as a hysteresis loss, which is proportional to the area of the hysteresis loop. 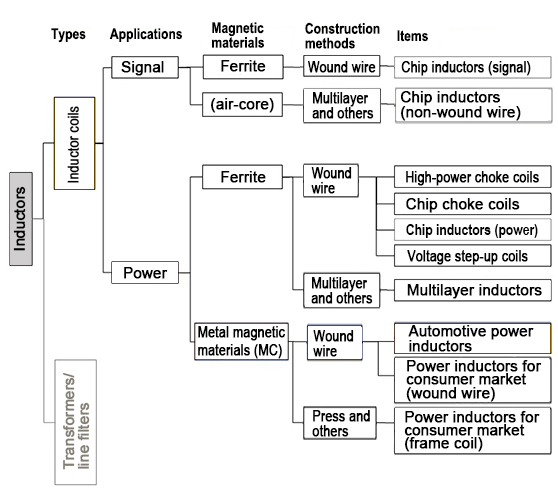