What is Surge and ESD?

Surge and ESD (electro-static discharge) refer to transient high voltage, and possibly a very dangerous noise under certain conditions. A Surge and ESD may cause malfunctions to the equipment or circuit when the level reaches a certain degree, and the level often experiences high voltage far exceeding the permissible range. In such cases, the affected component or equipment is broken in an instant. The diagram is a mapped image of surge voltage and its width.
Surge and ESD are described below. 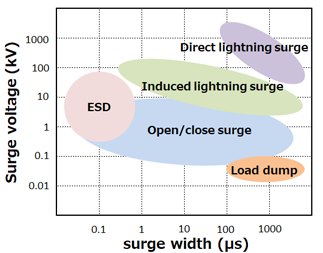 Open/close surge is a transient high voltage surge induced in a switch or relay during its on and off operation, particularly when turning off, which causes rapid current change and inductance of the circuit or wiring. Voltage generated by an open/close surge is very high, and in some cases, it generates spark, heat or radiates an electromagnetic wave caused by a large damping oscillation current generated by floating static capacitance of inductance and contact. This high voltage surge may cause a malfunction of an electronic circuit, and in some cases, lead to the destruction of a component. And the emission of an electromagnetic wave through damping oscillation causes EMI, thus requiring suppression measures for an open/close surge.

Load dump is a surge generated by cutting the battery connection off on an automobile. The most severe instance occurs when the battery connection is lost while the automotive engine is in operation and the alternator (battery charging generator) is charging the battery. The magnitude of surge voltage is determined by the alternator rotation speed and magnetic field excitation strength at the moment of cut off. Surge voltage exceeds 100 V in some cases for a duration of several hundred milliseconds. Because this surge has such a large amount of energy, it can easily destroy an electronic component. Permissible load dump is specified by auto-makers and automotive equipment makers in the form of maximum voltage, line impedance, and duration time. For load dump testing, JASO A-1 (Japan) and ISO-7637-2 Pulse 5 (U.S.) is applied.

ESD (electrostatic discharge) is a phenomenon where a charge is stored in a small floating capacity on a human body or substance then discharged to a nearby object, and is classified as one type of surge. ESD duration time is short with little energy, but because it generates transient high voltage as high as several kilo volts, it can generate a malfunction of electronic circuits or damages electronic components.
For the evaluation and testing method of an ESD, a human model or machine model is generally used. And protection is possible by utilizing the components based on these assumptions.

For the purpose of protection against a surge and ESD, use of a varistor or zener diode is the general choice. These components have a high electrical resistance when the terminal voltage is low, but the resistance suddenly becomes low when the voltage gets higher.
By using this tendency, the component prevents a surge from entering the circuit by bypassing the current when a high voltage surge occurs in an electric circuit.

The diagram to the right illustrates how to protect a power supply circuit from induced lightning surge by using a varistor. By connecting a varistor in parallel with the power input side line, an induced lightning surge, as high as several-thousand volts, is restricted by the varistor to a level that won’t cause component destruction or deterioration of the power supply circuit. 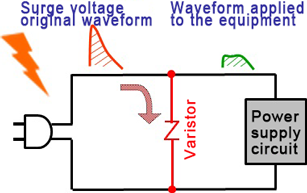 Panasonic“ZNR®”surge absorber is a ceramic varistor for surge absorption against induced lightning surge, open/close surge and load dump surge.
Panasonic was the first manufacturer in the world that commercialized ceramic varistors with a superior ceramic material design and process technology backed by many achievements in device design and production engineering. “ZNR®”surge absorbers are produced mainly from the material zinc oxide (ZnO) and several additives, as well as the ceramic element created using the sintering technique. This product provides excellent voltage non-linearity characteristics in parallel with those of zener diodes along with large current resistance characteristics not found in other products. This product can be used for a wide variety of applications such as voltage stabilization, pulse voltage suppression, open/close surge voltage absorption, and protection from a lightning surge.
“ZNR®”is an acronym of Zinc-oxide Non-linear Resistor, and is a registered trademark of Panasonic.

Whether the specification meets the presumed surge voltage/current and circuit voltage used is examined when selecting a “ZNR®” surge absorber.

The “ZNR®” surge absorber has a broad lineup that supports power plants and general electronic devices. 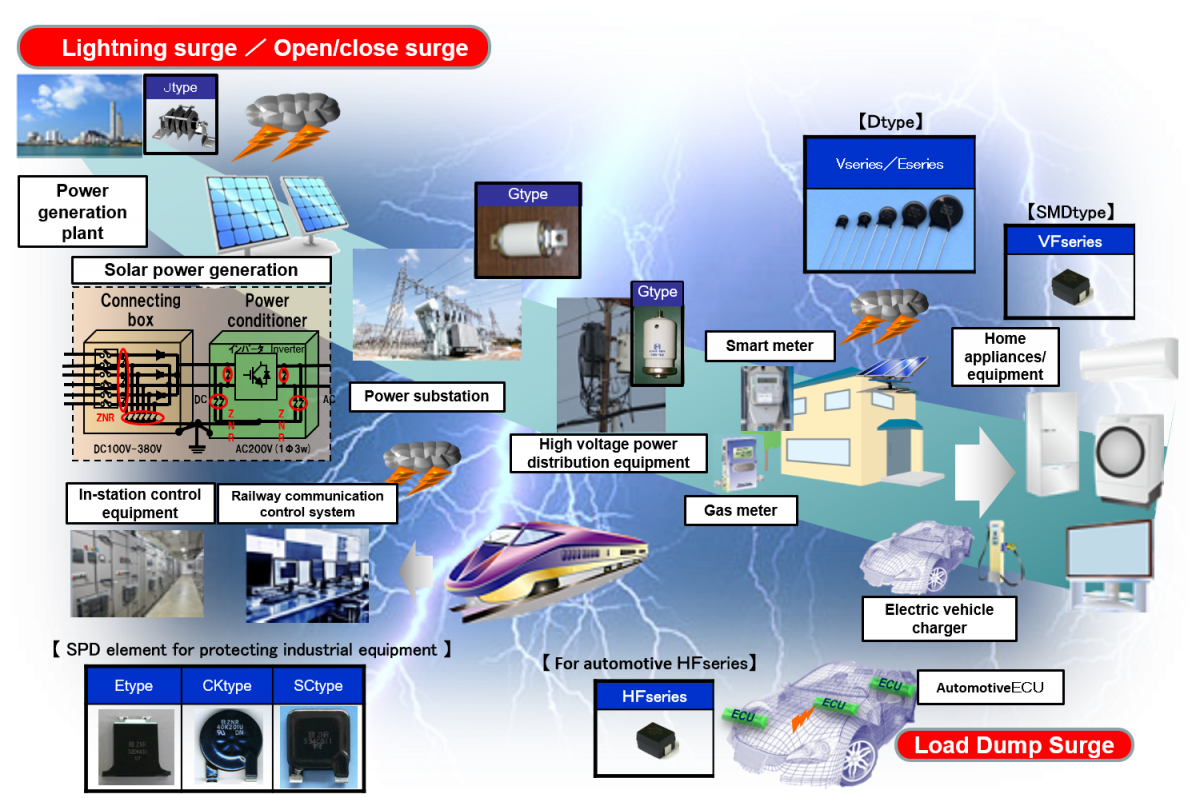 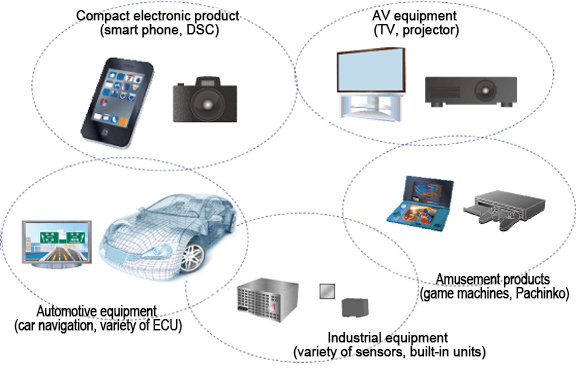 No deterioration of
transmission quality

Shown below are the examples of using ESD suppressors.

Advantage of replacing the zener diode

As an anti-surge/ESD component, a zener diode can be used instead of a varistor or ESD suppressor. The advantage of replacing a zener diode with a varistor (“ZNR®” surge absorber, chip varistor) is described here.

What is a zener diode?

Before replacement, we should know what a zener diode is first.
The voltage and current characteristics of a zener diode are shown below. A single zener diode provides voltage restriction effect only at the negative voltage side, but by using two diodes in an opposite series connection, bidirectional voltage restriction effect can be obtained, as is the case in a varistor.
For an advantage over a varistor, effective protection voltage can be set at a low level of several volts.

However, for disadvantage, they require a large shape and more weight as well as a larger mounting surface area than a varistor. In order to obtain the same surge/ESD absorbing effect as a varistor, the unit needs to be constructed with 3 components, including a capacitor, instead of a single varistor.
Although a bidirectional zener diode is available by connecting two diodes in a single package, it is still larger than the size of a varistor.

Advantages of replacement by a varistor

When zener diodes are replaced with a varistor (“ZNR®” surge absorber, chip varistor), the following advantages can be obtained.

As ESD prevention components, we reviewed the chip varistor, ESD suppressor, and zener diode. The difference and features of each component are summarized in the table below.

Application coverage for each ESD prevention component is summarized in the diagram below. 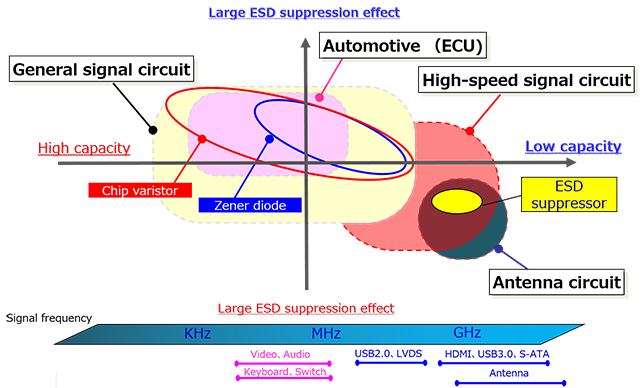