What are high precision chip resistors?

High precision resistors are required when carrying out high precision measurements and controls that make use of the high precision of these resistors. For example, the output voltage VOUT of the inverting amplifier of the operational amplifier shown below is determined by the equation indicated. It's the same for the voltage regulator VOUT. As shown by the equations, if the operational amplifier and voltage regulator are ideal and without errors, the ratio of the two resistors determines the desired output voltage in both cases. In this case, one idea is to accept the value as long as it is relatively the same. However, if the absolute precision of the two resistances is high and their temperature coefficients are small, processes such as checking and adjustment can be mitigated. Furthermore, in current sensing applications, the precision of resistors directly translates into voltage conversion errors.

The diagrams below show the numerical images of the precision and TCR of the thin and thick film chip resistors and compare their features and performance.

Panasonic has achieved ultra-low TCR and ultra-high precision for their thin film chip resistors. The ultra-low TCR was achieved through optimization starting with the origin of board materials and the application of sputtering technologies developed by the company's Production Engineering Laboratory, and the ultra-high precision through fine pattern formation technologies using photolithography. In addition, the adoption of Panasonic's unique high-durability resistance materials/electrode structure has produced high reliability and thermal impact resistance, thereby achieving high durability and high precision required for thin film chip resistors for automotive use. 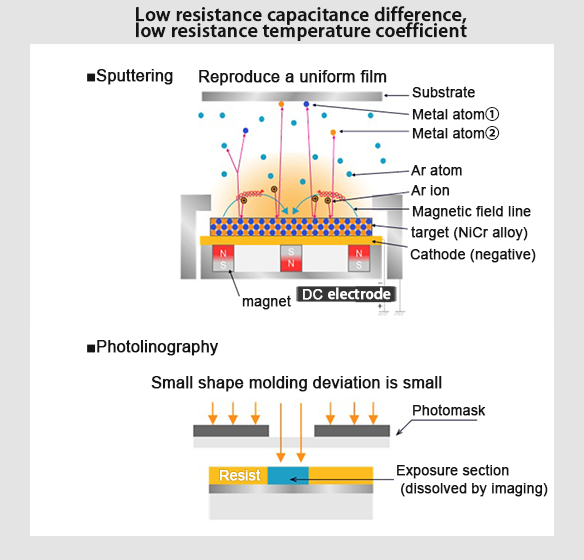