Radial lead-type film capacitors for high voltage/frequency and Safety standard approved products have a fuse in each of the cells formed by separating vapor deposition films using Panasonic's original vapor deposition pattern technology. When a local breakdown occurs due to an overcurrent, etc., only the fuse in one cell is cut off, allowing the capacitor to maintain its overall function. The use of thin films has enabled downsizing in addition to high safety.

Each cell has a fuse. 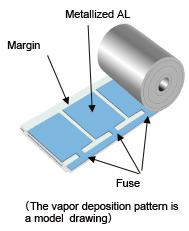 When a breakdown occurs, the fuse of the cell is cut off by a short circuit current. The cell of the broken part becomes an open circuit, allowing the capacitor to maintain its function. 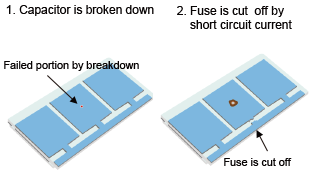